As reported in The Roanoke Star on March 28, the Virginia General Assembly dismissed last month yet failed in their responsibility to create a 2022-2024 budget for the Commonwealth. Therefore, Gov. Glenn Youngkin has called a special meeting on April 4 to solve this dilemma. gov. Youngkin and the GOP-led House of Delegates have proposed a gas tax “holiday,” a doubling of the standard deduction on state income taxes, and an end to the state grocery tax. Of note to Southwest Virginians, the bill to end the grocery tax was spearheaded by Del. Joe McNamara (R-8, Roanoke County, Salem).

Although the gas tax “holiday” would not bring prices as low as Virginians enjoyed during the final years of the Trump administration, it would provide a bit of relief as prices are now in the unprecedented $4.00/gallon range.

Moreover, despite the recent pandemic and economic slowdowns, the Commonwealth now enjoys a $16.7 billion budget surplus. The GOP-led House plans to return $5.1 billion of that to Virginia taxpayers, while the Democrat-controlled Senate proposes returning only $2.2 billion.

So far, Senate leadership has boasted of being a “brick wall” in opposition to reform legislation from the new governor and House of Delegates, and seems to be on track for April 4 to kill the gas and grocery tax relief, and return the lower , $2.2 billion to taxpayers. Since Virginia’s 40-member Senate has a narrow 21-19 Democrat majority, each vote is crucial. 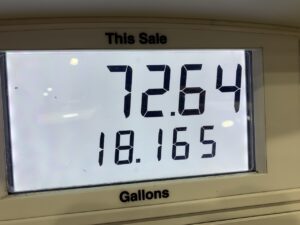 Due to changing political realities and orientations, Sen. John Edwards is the last remaining Democrat in the State Senate from the western one-third of the state. Many observers of state politics believe he has managed this due in large part to the heavily-gerrymandered lines of District 21, which combine the Democrat-leaning voters of Roanoke City and the Virginia Tech area and exclude the surrounding rural areas. Sen. Edwards’ vote–and those of his colleagues–on April 4 will help determine if Virginians if get a gas tax holiday, and end to the grocery tax, and a larger refund from Richmond, or not.