The implementation, which is expected as early as 2023, depends on measures at national level. The countries would include the minimum tax liability in their own laws. Other parts might require a formal contract. The draft proposal was adopted on July 1st in talks convened by the OECD between more than 130 countries.

Italy hosted the meeting of finance ministers in Venice because it holds the rotating chairmanship of the G20, which accounts for more than 80 percent of the global economy.

The event also attracted around 1,000 protesters under the banner of “We Are The Tide,” an umbrella group of environmental and social justice activists, including opponents of large cruise lines and the hordes of tourists who bring them to the lagoon city. A small group fought with police on Saturday after breaking out of an approved demonstration area.

The US already has a minimum tax on foreign income, but President Joe Biden has proposed doubling the rate roughly to 21 percent, which would more than match the proposed global minimum.

The increase in the rate is part of a broader proposal to fund Mr Biden’s employment and infrastructure plan by increasing the domestic corporate tax rate from 21 percent to 28 percent.

Ms. Yellen said she was “very optimistic” that Mr. Biden’s infrastructure and tax legislation will “contain what we need for the United States to meet the minimum tax proposal”.

Republicans in Congress have spoken out against the measure. Texas Representative Kevin Brady, the top Republican on the tax committee, criticized the OECD deal. “This is an economic surrender to China, Europe and the world that Congress will reject,” he said. 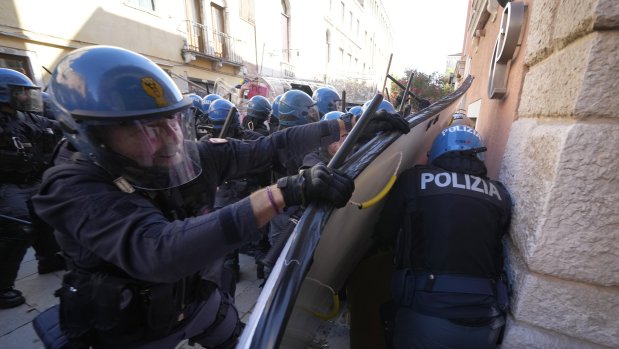 Italian police in riot gear clash with protesters in a protest ahead of the G20 meeting. AP

The international tax proposal aims to discourage the world’s largest companies from using accounting and legal systems to shift their profits to countries where little or no tax is due – and where the company may have little or no actual tax Doing business.

Below the minimum, companies that evade taxes abroad would pay them domestically. This would remove incentives for the use of tax havens or their establishment.

From 2000 to 2018, US companies posted half of all foreign profits in seven low-tax countries: Bermuda, the Cayman Islands, Ireland, Luxembourg, the Netherlands, Singapore and Switzerland.

A second part of the tax plan is to allow countries to tax part of the profits of companies that make profits without a physical presence, for example through online retail stores or digital advertising.

This part came about after France, followed by other countries, imposed a tax on US technology giants like Amazon and Google.

The US government regards these national taxes as unfair trade practices and is resisting retaliation against these countries’ imports into the US through higher import taxes.

Under the tax treaty, these countries would have to lower or refrain from reducing their national taxes in favor of a unified global approach in order to theoretically end the trade disputes with the USA.

US technology companies would then only be confronted with one tax regime instead of a multitude of different national digital taxes.