“In this world nothing is certain except death and taxes,” said US founding father Benjamin Franklin in a letter to a French friend in 1789. His much-quoted bon mot feels more relevant today than ever before – and maybe even more so.

That’s because taxation will play a huge role in rebuilding the global economy after the pandemic, and a fair and comprehensive sharing of that tax burden will be critical to a successful recovery.

Corporate tax in particular has been a sensitive issue for some time as large multinational corporations continue to use their global presence to shift profits to tax havens in order to minimize their tax liability in countries with higher taxes.

To avoid tax arbitrage between countries, the G7 – the world’s seven leading economies – agreed in June to introduce a worldwide minimum tax of 15% on the world’s largest companies. In addition, regardless of whether the companies are based, the countries in which they operate can receive a fairer share of taxes.

Much of this plan stems from previous work done over many years by the Organization for Economic Co-operation and Development (OECD) as part of its Profit Reduction and Profit Shifting Initiative (BEPS).

Before ratification by the G20, the question arises: will the G7 tax reform achieve its goals?

Why do we need a new corporate tax system?

Between 1980 and 2020, the average corporate tax rate worldwide fell from almost 50% to around 24%. But many of the largest companies in the world – especially the largest tech companies in the world – are paying even less. In the US, for example, their effective tax rate is well below the statutory rate of 21%. It is also lower than large blue chip payments in other sectors.

At the same time, wage taxes are rising, creating a huge gap between taxpayers and the world’s largest corporations. Wage taxes now account for a larger proportion of US national income than corporate taxes – despite stagnating wages. Business Insider quotes Gabriel Zucman, a corporate tax expert at the University of California, Berkeley, and describes this scenario as “a powerful engine of inequality.”

In a recent report, the World Economic Forum calls for more progressive tax mechanisms to be developed in order to shift the tax burden from the bottom up. But will this achieve a uniform corporate income tax as envisaged by the G7?

There is a growing consensus that this is a step in the right direction, but that many details need ironing out to know if this would actually solve the problem.

The assessment of the effects of the G7 reform depends very much on your perspective.

The Biden government originally aimed for a global corporate tax rate of 21%, while advocates such as the Tax Justice Network and Oxfam called for 25%. The agreed 15% is a little lower.

For those campaigning for a fairer corporate tax, the percentage will be too low, says Dani Rodrik, professor of international political economy at Harvard University, in a comment for Project Syndicate. But countries that rely on corporate tax incentives to attract foreign direct investment (FDI) will find the level too high. This is especially true for emerging economies – Rodrik cites Moldova (12%), Paraguay (10%) and Uzbekistan (7.5%) as examples.

How will the G7 corporate tax reform affect emerging markets?

There are concerns even among developed economies. Ireland, which relies heavily on tax incentives to attract FDI (12.5%), could be affected. And in the UK, the proposed regime could cut about two-thirds of the country’s current income from its digital tax on large global tech companies operating in the UK.

However, that’s nothing compared to low- and middle-income countries, which arguably need the most more tax revenues to cope with the post-COVID recovery. In these markets, as the Financial Times reports, there are fears that multinational corporations will still pay most of the taxes where they are located and that developing countries will receive only a small fraction of the new tax revenues, even if workers and raw materials are affected Countries.

The African Tax Administration Forum, for example, has advocated a tiered approach to corporate taxation for smaller countries, which makes it possible to set different thresholds and rates for tax liability in smaller economies.

However, the focus on the G7 – and the G20 in the next phase – also means that many low- and middle-income economies are currently not “at the table” to influence the negotiations and deliberations. 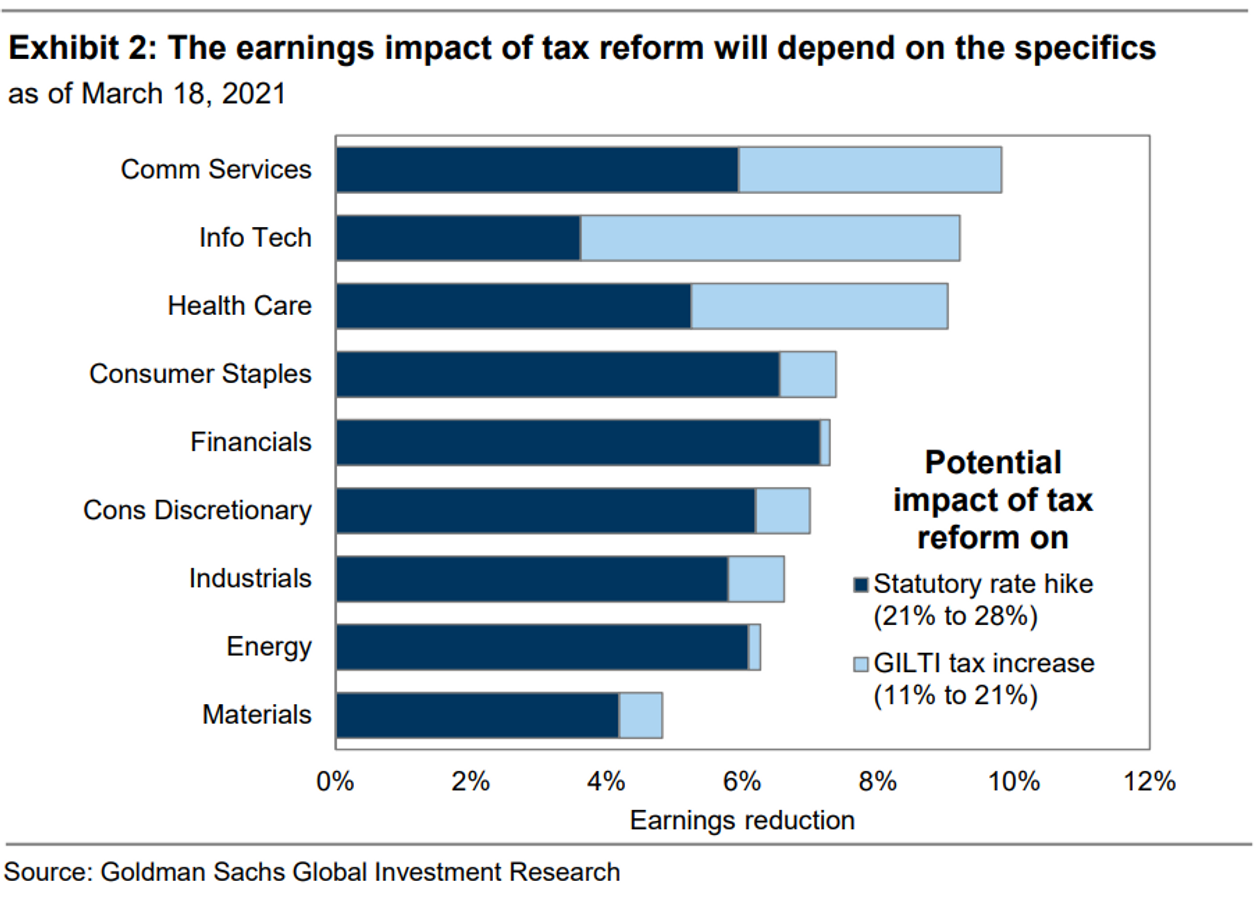 The communications services and technology sectors have been hardest hit by the corporate and foreign income tax increases.

What alternative approaches are there for a fairer corporate tax system?

When you look at the impact of the G7 agreement, the biggest lesson is that even if the G20 ratifies the plans and smooths the edges, it will be no more than a drop in the ocean for the world’s largest corporations. Goldman Sachs analysts have predicted that the impact on the S&P 500 will average only 1-2% and remain well below 3% even for tech companies (see chart).

One problem is that corporate income tax would continue to be levied on profits under the G7 system – and profits, as we have seen, are a moving feast. In addition, there are large multinational corporations whose sales and market capitalization have increased significantly, but whose profit margins have remained below the 10% threshold proposed by the G7. As things stand, these organizations would not fall under the G7 program.

While ways are being explored to address this, another suggestion for creating a fairer distribution of taxes comes from tax experts Emmanuel Saez and Gabriel Zucman of UC Berkeley. Instead of taxing profits, their proposed scheme would impose a 0.2% tax on the market capitalization of listed companies – the value of their shares. What is important, however, is that this system does not wait for profits to be made above a certain threshold – it would pay out much sooner. The taxes levied could be distributed in proportion to the sales made in each country, which would include non-G20 countries.

A reform proposal by the United Nations must also be taken into account. The United Nations approach, which is specifically geared towards digital service companies, is based on taxing companies’ digital revenues where they are generated, on a country-by-country basis rather than where the company is located. The UN proposals are supported by a growing number of emerging economies, including India, Argentina, Nigeria and Vietnam.

Alternatively, Alex Cobham, Chief Executive of the Tax Justice Network, has advocated the concept of a minimum effective tax rate (METR). In a recent Agenda article, he argues that the METR “provides a simple, single rule for all countries and multinationals, with no treaty changes”.

The World Economic Forum has published its 2020 Davos Manifesto calling on business leaders to join a number of ethical principles, including:

“A company serves society at large through its activities, supports the communities in which it operates, and pays its fair share of taxes.”

Based on the reforms led by the OECD, the work brings technical questions closer to a high-ranking audience and enables an honest dialogue between different interest groups on polarizing topics. You can find relevant publications here.

Ironing out the wrinkles of a global corporate tax system

With the G20 pending ratification, it is clear that the G7 proposal is a historic attempt to get the world to align on corporate taxation. But ratification will only be the beginning of a long process of designing a global corporate tax system because, as we have seen, there is no one-size-fits-all solution for countries.

The biggest question mark hovers over whether a corporate tax cut – in the case of the G7 program to 15% – supports the growth that would be critical to the recovery from COVID-19. A recent meta-analysis of 42 academic studies found that “the attention given to corporate taxation in debates over structural economic reform as a source of economic growth seems broadly excessive. Corporate tax cuts may have stimulated international tax competition […] but they do not seem to have promoted economic growth significantly. “

Corporate tax should not be seen as a panacea, and other – faster – avenues need to be prioritized alongside it.

To fill the immediate budget gaps, especially in developing countries, it may be worth considering the International Monetary Fund’s concept of a solidarity tax levied on high incomes or wealth. The IMF sees this as a way to pool the resources needed to recover from COVID-19. This proposal would also challenge high net worth individuals, many of whom pay no or very little tax.

The views expressed in this article are those of the author only and are not those of the World Economic Forum.

Half of the state’s corporate tax income might be worn out, warns the IMF